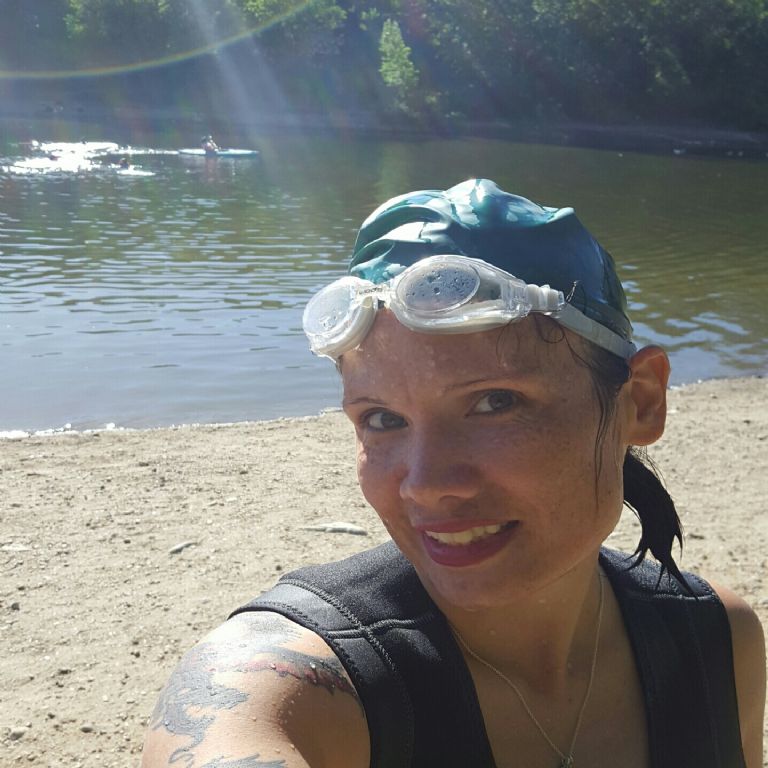 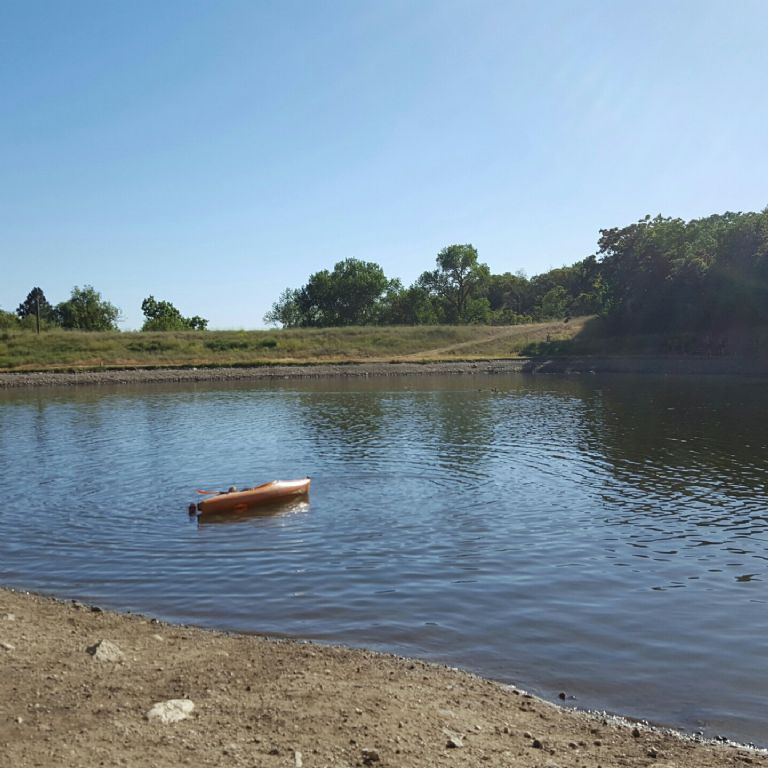 I was terrified. I put on a rented wet suit and got my goggles, cap and nose plug on. I took a deep breath and looked at the open pond. It looked green. There were ducks flying in and out of the water and feathers floating at the surface. I could see the entire pond, looking somewhat friendly, being as small as it was. How deep could this water be? What kind of creatures could be living in this water? Could something crawl out and grab me? I was worried. Being as small as it was, it could be that deep. As murky as it was, it couldn't have that many creatures in it. i tried to reassure myself. This is it though. I have to try. I have an open water triathlon planned for September and I have to be ready. I moved slowly in the water until I was waist deep. I wasn't alone. My triathlon teammate was there to do some swimming with me and help me. Her daughter would follow us in a kayak. I started freaking out and hyperventilating. How was I supposed to do this? "I have to do this, I have to try," I kept trying to reason with myself. I got my head in and started swimming. I can't see anything in the water. It is all green and murky. "Where are the lane lines?" I can't see where I am going. I was breathing on every stroke, going faster than normal pace. I was anxious to get to the other side as fast as I could. I wanted this to be over. I realized I couldn't catch my breath. I was breathing too hard. I looked around. I was right in the middle of the pond. There was nothing to hold onto, no wall to grab. I floated on my back, still trying to breath. The kayak came right behind me, but I wanted to get to the other side. I tried again. Trying not to freak out this time. I tried to just get comfortable with being in the water. I realized I was sticking my head up, out of the water more than I should. I was trying to "not be in the water." This was scary. i didn't want to see in the water, I didn't want to look around. I didn't want to see fish or the endless abyss that was the bottom. After a few frightening moments of frantic swimming, I made it to the other end. "Whew..." I looked at my GPS watch, 58 yards. That seemed like an eternity. My teammate had already made it the other side and was waiting for me. She asked me how was doing. I said, "I think I threw up a little bit in my mouth." Then, we needed to transverse to the far side of the pond. This time, the kayak stayed closer to me and I was able to hold on a few times for a break. I still was freaking out though. I made it to the far side. I needed to slow down though. I was running out of breath much too quickly. I was pushing myself much too hard. I was getting more nervous than I should. I kept trying to calm myself down. I started to look around in the water a bit more. i slowed my pace, I started to look up more to sight for direction instead of aimlessly and frantically trying to get to the other end. By the end of the adventure, we crossed the pond 6 times with a total distance of 463 yards. This was an accomplishment for the day!! I was still shaking when we were done. Not because I was cold, but because I couldn't believe that I had done it!
Share This Post With Others
Report Inappropriate Blog
Member Comments About This Blog Post