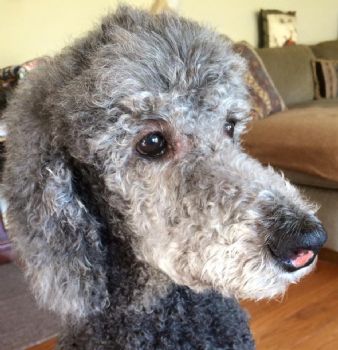 A few Spark friends have asked about Stella. In February of this year, she became desperately ill. She had shown some sudden lameness in January right after grooming. I though she might have jumped off the grooming table wrong and injured her foot, but the groomer had no idea how she could possibly have become injured. An X-ray at the vet showed no broken bones, so we thought she might have a sprain.

I left town leaving Stella with my husband for a couple of weeks, expecting she would be healed up by the time I got home. Instead, when I returned it was apparent that she needed an immediate trip to the vet. She was lethargic, had seeping sores on her body and in her nose, and her nose was hot and dry. From the tumors on her body, I thought she might have advanced cancer.

I feel so fortunate that our vet is brilliant. She thought cancer was likely, but was suspicious of the sores in her nose. She ended up running tests for both cancer and blastomycosis, a systemic fungal infection, and told me to start her on the anti fungal medication while we waited for the test results in case it was that. Her tests came back positive for blastomycosis, which is very serious but was the better news.

It has been a long haul and will continue to be a long haul, but her blastomycosis treatment of Sporanox and Prednisone has brought her back from the brink. She is beginning to have her old energy back and her lesions are almost healed. In the photo, you can see what is left of the lesions around her nose and eyes. The ones on her body have dried up, and her lameness has almost disappeared.

She will need to be on Sporanox for many months, as well as continue on a grain free diet until she tests free of blastomycosis, but everything points to her making a full recovery. The annoying thing is that this will not make her immune to blastomycosis... she can get it again after she recovers. However, now I know what to look for so if she should become reinfected we can start treatment before it gets into her bones, blood, and lungs.

We are glad to see her progress and feel very hopeful about her returning to her peppy, obstreperous self.


For more information about blastomycosis: