The long road back... 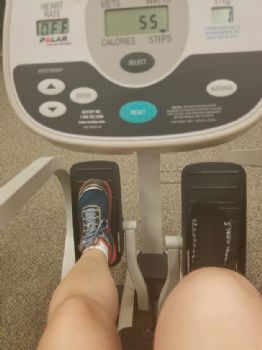 I know, I've been gone for a long time. It has been a crazy and terrible few months.

Recap: tore a tendon in my right ankle back in September. Tried to rehab it, but just could not.

I opted for surgery, which happened on March 9. A little more than a month out now, and I had my first physical therapy appointment this morning.

Here's the long version: I have gained back at least 20 of the 50 pounds I lost. I have not been able to participate in any of the activities I enjoy since September. I lost an entire fall, winter, and now spring season, sitting on my butt and watching life pass me by. All of this has left me deeply depressed and withdrawn.

I haven't been on this site for months. Every once in awhile I would get a notification that someone left me a message on my page, and I would just cringe. I had nothing to say that I thought anyone would find remotely interesting.

And I still have SO long to go. I have had this surgery before, which is both a blessing and a curse. Based on my recovery last time around, I know that by six months out from surgery, I will be MOSTLY okay. I will be able to get around on my own two feet, without a boot or crutches. I will be able to walk on flat ground with no trouble. I will be able to walk on uneven ground with a brace, some weakness, and some pain. Over the next six months, every day I will get a little bit stronger, a little bit more steady and stable. And by 12 months out from surgery, I will be back to whatever my new "normal" is, as far as stability and pain. The strength may still continue to improve somewhat over time, but the one-year mark is a pretty good indicator of what my long-term recovery will be.

The bad: six more months. Man. That means that, in addition to the Fall, Winter, and Spring I have already missed, I will be mostly sitting out Summer, too. The six-month mark falls in October, more than a year after my initial injury. Not only is an entire year just . . . GONE, but I still have almost five months to go. It is really, really tough to stay upbeat right now. But I am trying very hard.

The good: I'm already a month and a half into the five-month recovery period!! I will not lie and say it has gone by quickly. It has basically been six weeks of limbo; sitting around waiting for it to heal enough to put any weight on it at all has been torture. Now I am partially weight bearing (in a boot). I can get around so much more easily than when I was using a combination of crutches/wheelchair/knee scooter. I am able to drive again and generally have much more freedom. That is HUGE.

Also, I know it is absurd, but I left physical therapy this morning feeling STRONGER. Part of why this has been so hard for me is that when I started my weight loss journey, about a year and a half ago, I had very low self-esteem. I started exercising and doing lots of outdoor activities and discovered that I felt this enormous sense of accomplishment every time I surpassed a goal or obstacle. I was doing things I never before imagined I could, and all of a sudden the world was full of possibilities and I felt unstoppable. The loss of that feeling has been harder than any of the other things that have happened in the past seven months. I am absolutely thrilled to have a little piece of it back.
Share This Post With Others
Report Inappropriate Blog
Member Comments About This Blog Post