It's Pride weekend and I've been in Sacramento with my mom since Thursday evening. We've had a good visit, but it has been a stressful time for her, and it will be a while before it gets better. My dad was in the hospital from June 15-26 and is now in a rehab facility for the second time in 4 months. At the age of almost-88, his body is starting to wear down. He is having difficulty standing up from a sitting position, which makes any kind of movement difficult and sometimes painful. We talked yesterday about the possibility that he may spend the rest of his life in a wheelchair. He's ok with that, although not particularly excited.

Mom, who will be 85 in September, has trouble with mobility as well, but she can still get around with a walker. She's discovering her own inner strength, and that's been a good thing with her spending so much of this month (including the day of their 65th wedding anniversary, June 19) by herself.

My youngest sister Janet and her husband John have been touring assisted living facilities closer to where they live in Citrus Heights, a suburb on the northeast side of the county. We hope to have Mom and Dad moved into a new place by the end of August. I am incredibly grateful for Janet and John's willingness to take on the role of the primary overseer of Mom and Dad's living situation and overall care.

My younger sister Carol, who turns 60 on the 4th of July, had a mild heart attack this week and is also in the hospital. Carol seems to have drawn the "health-issues bad luck" card, but she's a strong fighter and we know that she'll get through this as well. Still, it was another thing for Mom to have to deal with emotionally, and that was a challenge. (We debated not telling Mom, but in the end felt that it was better that she knew about Carol's condition.)

[UPDATE 1:00PM - my sister's angiogram showed that she did not have a heart attack - the muscle has not been damaged. She has a narrowing of one of her cardiac blood vessels that may have trouble allowing a clot or plaque to pass easily, but it's not impossible. There doesn't appear to be any blockage. This was terrific news, and she should be able to go home tomorrow.]

I'm only sharing all this because I always appreciate prayers and thoughts, and if I'm not as present as I normally am, you'll know what. I think a lot of my summer weekends will be spent coming to Sacramento to check on the folks. I'm very blessed to still have both of them, I know, and they are still reasonably mentally aware for their age so our interactions are positive and good. Every day with them is worth its weight in gold.

I want to express my gratitude at having met my dear Spark friend Bobbi Anne (FLORIDASUN) and her husband Don in March 2018 at their home in Florida. I arrived at their consignment shop a little earlier than expected, and Don was there. We had a wonderful conversation about their business, their marriage, and their son Josh. He was a gentle man and a gentleman. I saw the love in his eyes when she returned to the shop from an errand. He finished his journey on earth way too early this past week, and he will be missed. I am blessed that I got to know him, even briefly.

Last night I spent a little time with some dear friends Katie & Peter (aka Kater) who are celebrating the upcoming arrival of a new son (aka KaterTot) in October. Our friend Jen hosted a party for them, and I got to see and hug a lot of people I haven't seen in a few years. It was a really happy evening. I get to be an uncle for another little one! 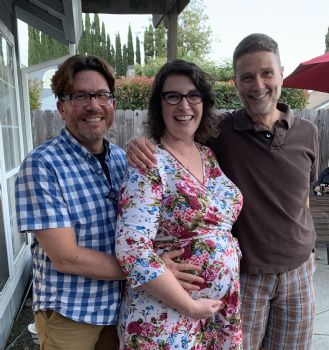 Enjoy your family - biological and logical - while you can. I know I am!
Share This Post With Others
Report Inappropriate Blog
Member Comments About This Blog Post