Cast Iron - It Ain't Your Grandma's Cookware. Oh wait, it is…

Quick piece of background on me - I want to tell you that I am in my mid 20s and am on SparkPeople primarily to maintain my 175 pound physique. That's what I *want* to tell you. Truth is, I am 50 and have spent the better part of 25 years working in various IT departments and I a part of me does weigh 175 pounds... it's the rest of me that weighs a lot more! No, hold on, that's relevant! Now don't get bored and assume I have no personality because I am a computer nerd. I mean, that's true, but don't leave simply because you assume that. But I bring up the IT thing because my career has been built almost entirely on adopting and implementing new technology. And, as you'd correctly surmise, that attitude towards tech has filtered into almost every aspect of my life. Not too many years ago, you would have found me looking at the latest tech in non-stick cookware, electronic kitchen gadgets... I almost even "required" our new fridge have Internet capability. Why? Because it can. And that's a good enough reason. And I am still very much like that - I love my Instant Pot. Sure, pressure cookers have been around for decades but the IP has electronic safety controls that prevent it from building so much pressure that it would explode. My sous vide circulator? Yeah, that toy can maintain a cooking temperature within +/- 0.1 degrees. And I kinda suspect that my new microwave is secretly capable of launching NASA satellites (I’m still reading the manual, though). And so it is with some surprise that I have found myself getting rid of the stupid non-stick cookware as it wears out and going with cast iron. Seriously, I have yet to have a piece of non-stick that lasted more than four or five years at best. And I take care of them - I hand wash them, only use a soft sponge and soap (instead of detergent), cook at lower temps... and they still just wear out. So I decided to give cast iron a try. After all, it's often touted as the original non-stick and is definitely low-tech. I picked up my first piece - a 12" skillet from Lodge (pre-seasoned) and tried it out. After all, I remember as a child being at my grandmother's house and seeing her cook with cast iron. And I know her parents did, too. 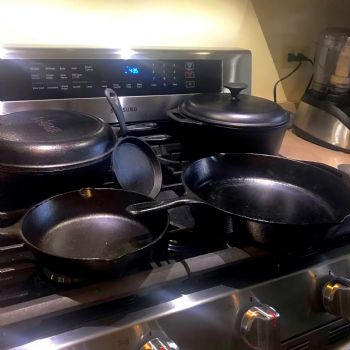 "Disappointed" is the best word to use. Turns out that that there are some... "rules" for lack of a better word. Armed with some new knowledge, I tried again: * I re-seasoned the pan. * I heated it properly and dropped the heat * I used a bit more oil And then I tried it again and I was hooked. So let's talk about those three things: SEASONING -----------
------- Even if your pan arrives pre-seasoned, I would strongly recommend you season it again. No need to take the factory seasoning off, just add to it. Pour a bit of sunflower or safflower oil in the pan, then rub it all over the pan, covering every part of the surface, inside and out. Then take a piece of paper towel and remove all that oil. You want to be left with a micro-thin layer of oil. Put it in cold oven and then turn the oven on to 425 degrees. I also put a sheet of aluminum foil on the bottom of the oven just in case I left a bit too much oil in the pan and it drips. I then bake it for about two or three hours. What is seasoning? It’s the process of applying a lot of heat to oil over a period of time and that process is called polymerization. By baking that oil onto the pan, you're adding a polymer layer on top of the cast iron. That's why it becomes non-stick. The longer you can bake that oil, the more complete the process of polymerization is. BUT... If the oil starts smoking, that means that the oil is breaking down and the polymerization process won't work. Plus the oil releases those harmful free radicals. 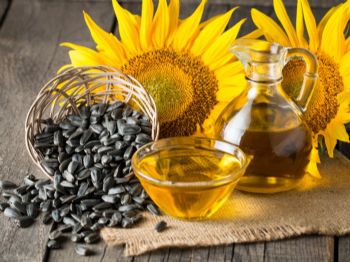 And THAT is why I use Sunflower oil (a lot easier to find than safflower) - Sunflower oil has a smoke point of 450 degrees (smoke point is the temperature at which oil starts to smoke and breaks down). So if you use sunflower oil and bake it at 425, the oil never smokes and you can bake the pan as long as you can. Then turn the oven off and let the pan cool completely in the oven. Besides, where in your kitchen can you really safely place a 425 degree chunk of cast iron?? If one of my cast iron pans seems to be losing its non-stick nature, I'll go ahead and re-season it. PROPER HEATING ----------------------
----- Cast iron is a wonderful cooking material because it holds heat so well. However, it most certainly does not heat evenly. If you only heat your skillet or pan on top of the stove, you'll find you have hot spots. And that isn't conducive to good cooking. Especially if you're using the skillet to sear after cooking your meal in a pressure cooker or immersion circulator. What i do is put my pan into a cold oven, and turn it on to the temperature I want - usually around 400 degrees - and then leave it for about 30 minutes. Then I take it out of the oven and put it on a burner - the cast iron is now piping hot and heated evenly. UNLESS... ...I am cooking eggs and need that non-stick character. Then I would recommend using a lower temperature than you're used to because of cast iron's ability to hold heat. With my old non-stick pan, I would use it a burner set to medium flame. With my 8" cast iron pan, I use it on the same burner but set to medium-low. So yeah, if you're looking to sear, go high! Otherwise, you'll want to drop the temp down a bit. USING OIL and SPRAYS -----------------------
----------- But if it is non-stick, why use an oil? Cast iron, although called "non-stick" is more like "stick-resistant". A layer of oil will assist in keeping foods from sticking. Plus, the more you use the pan and use an oil or a cooking spray, the non-stick quality of the pan will just get better because that oil also becomes a polymer that sticks to the pan. But with these three new pieces of information, my enjoyment with cast iron skyrocketed. I am now a proud owner of several pieces (a few shown here), including my two workhorses - the 12" skillet and my 8" that I use exclusively (almost) for egg dishes. My 11 year old son asked me a while ago why I buy so many cast iron pieces. I told him it was so that he and his sister wouldn't have to. And that's the last - and perhaps greatest - reason for me switching to cast iron for most of my cooking - these are becoming legacy pieces that my kids will be able to pass along to their kids, along with the stories of helping me cook in the kitchen. Do you use cast iron?
Share This Post With Others
Report Inappropriate Blog
Member Comments About This Blog Post