It is still winter here in Maine, but it is still the time for lambs to be born. They seem to be dragging it out for an endurance trial this year, the first lamb was born 2/21/2020, kind of early for me, and it was a very cold night! Molly is a first time mother but she did ok. Both babies were ram lambs, one black and one white. The white one was chilled so I took her upstairs to the house and wrapped her up next to the pellet stove while warming up some colostrum since Molly’s milk wasn’t quite in yet. She was fed and warmed up and seemed bouncy and ok so I took her back to her mother and coated both lambs. The next morning the white lamb was down and chilled, I brought her back to the house, put a heat lamp on her and tried to get her to drink, I gave her some energy supplement by syringe slowly so she would swallow, then went to finish chores. She was starting to move around when I went back to the house so I decided to tube feed her and got colostrum warmed up, the tube feeding things sterilized, went out to feed her and she was dead. In retrospect I probably should have kept him in the house over night, but that is a tough call. 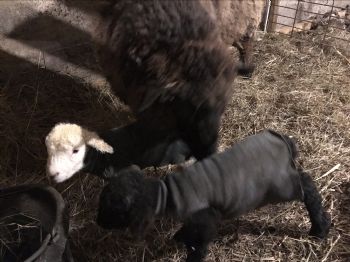 After quite a wait, Natalie presented with a big ewe lamb, this is her second lambing, she had twins last year and is herself a twin. Erinn, was named after my niece who now shares a birthday with a lamb 3-10-2020. 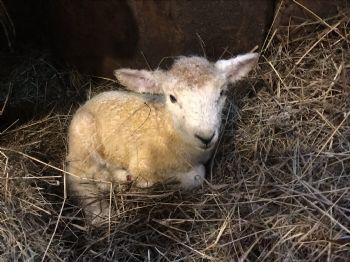 Erinn about a week old! 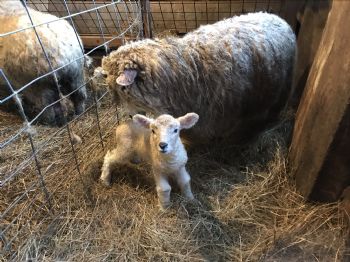 Caroline only waited 5 days 3-15-2020 to have a largish white ewe, she was up eating and running around when I went to do chores that day. I put a coat on her because it was cold and she was still wet and shivering. Then named her Karen! She has the cutest face, just sparking with mischief. Caroline is an older ewe that most often has twins. 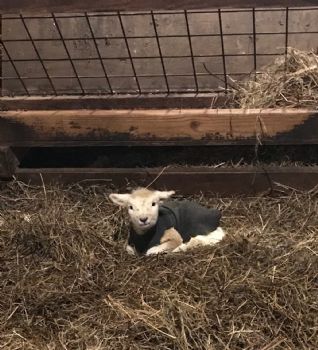 Karen 5 days later! Playing King on the mountain, or is that on Mommy! 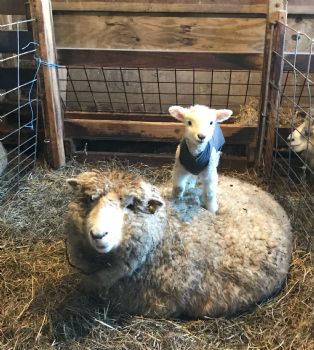 Then skip to 3-25-2020, Rita presented me with twin rams, one is smaller then the other, but both healthy and eating!
Looks like the smaller one is whispering in Mom’s ear! Newborn picture. 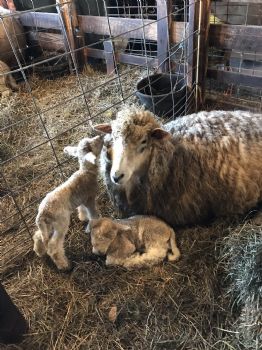 There are still 3 ewes left to lamb but today I was determined to switch the sheep around in a multi step process. There are two sheep pens joined by the feeders and a couple of gates so they can go from one to the other. The slightly bigger pen has a gate into a small side pen that I usually use for a creep feeder for the lambs. So at this point all the sheep with lambs were in separate lambing pens, the ram and the other 3 ewes were in the bigger pen. I am going to need the lambing pens for the remaining 3 and the Ewes with lambs were all ready for socialization, well almost all of them anyway.

Step 1: Move Lewis, the ram, to a pen down by the cows, without getting 3 ewes too! That was accomplished fairly easily because Lewis is a easy to handle ram.

Step 2: Close gates to make the space where two calves are stalled secure, one of the calves was out at the time, then push the three ewes across the aisle and into that space. Went fairly smoothly. At least I thought so, the remaining calf wasn’t impressed, she had never seen a sheep before, so it was Very Scary!

Step 3: Start moving the mothers with lambs, the one with the twins Rita, was in front, I don’t think she or the lambs are ready for company, so I was going to open the inner gates, then slide the panel over to the outside gate enclosing her but allowing access for the second ewe to go right over to the big pen. That was a good plan until I realized that there is a post to the ceiling in the middle of that spot and I couldn’t move the panel that way! Best laid plans.... So I stood there and pushed the stiffly flexible panel back, and the Caroline ran out and over to the big pen, pretty good except the loudly baaing lamb was left behind, so the mother charged back almost bowling me over to get back to the lamb. Take two: Caroline went back out of the pen, lamb started to follow but decided it was too scary, however I jumped behind her and pushed her over. Yay! first pair in the pen!

Step 4: Take down the panel for the next sheep, Natalie, and get her over to the other pen, that didn’t go as well, she was NOT going over there PEROID. I finally left my position by the panel blocking the first sheep, Rita, with twins from leaving, and what happened? she ran out without lambs and went into the bigger pen. I chased after her, brought her back protesting to her lambs. Gates are wonderful things, so I rearranged the long panels to crowd the remaining sheep into a smaller space close to where they needed to go out, closed off the gates going to the other pen, then grabbed the lamb opened the gates and took her over there, mom followed!

Step 5: Molly was in a lambing pen across the aisle, I was thinking this was going to be tricky. I closed the inner gate to the first pen, and opened the inner gate to the second pen, these gates open and close so I can get to the feeding aisle from the main aisle, or so they create a passage from pen to pen excluding the sheep from the feeding aisle or the main center aisle. So after placing a gate just beyond the opening to these gates, I grabbed the black lamb, wow he sure was heavy! Then took him to the pen were the other mothers and lambs were, Molly followed very nicely!

Step 6: still another step! I needed to take the long panels out of the pen, and the individual waterpails, then put hay in for the other ewes. That took a lot longer then it does to say it! The panels are about 12 feet long to fit across the pen and hard to manage with that pole in the front third, I usually turn then sideways then lift then over the side of the pen and tie then to the outside of the pen to store them, for some dumb reason I thought I could do that from the outside, didn’t work so well, finally went in and got them out! Cut the strings to all the water pails and took them out, then added hay.

Step 7: Get the other ewes out of the secure area and into the first pen. I had to move some hay, both bales and some loose hay on the floor first so the outside gate would open all the way, it hooks across the aisle completely closing it off so they only have one place to go! Once I opened the lower gate, the ewes ran out into the aisle, down and into the pen!

There is always a lot of noise, after this process of integrating the ewe/lamb groups back into a flock. Lambs run around baaing frantically trying to find mum, while the ewes basically ignore them, baaing once in a while calming the lambs down. It took them about a half hour to settle down. The lambs will have fun playing together!

Final step? It was already 2pm and I hadn’t even eaten breakfast yet!
Share This Post With Others
Report Inappropriate Blog
Member Comments About This Blog Post