Feb. 28: an observant Sparker noticed the very high sodium content of the recipe. I hadn't paid much attention to finding exactly the products I used in the making of it which are all low sodium. So that has been adjusted. Sodium will be even lower if you make your own broth. I also adjusted the servings--you should be able to get close to 16 cups of this.

Just added a very quick-to-make ham and lentil soup to SparkRecipes. Hope you'll check it out! 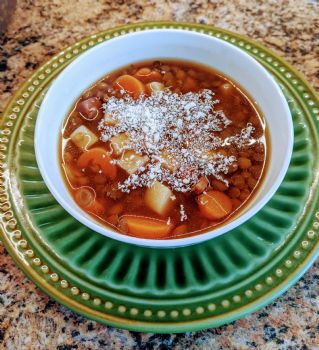 I've been making this recipe for at least 30 years and changing it little by little. Never used to add meat to it until this past year when I tried various types of sausage. My husband liked each variety, but I'm not much of a sausage lover. Finally hit on adding diced ham, and now I really love it and am going to stick with this version.

The other thing to change is buying the canned carrots and potatoes. It's not only faster for preparation, but if you're in a real hurry, you only have to cook it long enough to heat through.

It's traditional (as a German dish) to add a pinch of ground cloves, so you might try that if you like cloves. I don't.

If you are Catholic as we are, you can still make this for Fridays in Lent (or year 'round) by using vegetable/mushroom broth and omitting the ham. I would probably add a bag of frozen sliced mushrooms as I have lately discovered at Whole Foods and Publix. Hope to post that meatless version soon.

Please let me know if you try the recipe and how you like it!